Last week a pregnant 24-year-old college student was walking to her car on a lunch break when she was approached by a man with a knife. He forced her into her car, made her drive a short distance to an ally, where he raped her, then locked her in the trunk of her own car before he fled the scene. This happened near Chicago State University, on 98th and Indiana, which is roughly 5 blocks from the school I work at.

A note was sent home to the students during their 8th period class on Thursday, and the Principal and Police Officers held a meeting with all of the teen girls at our high school on Friday to discuss safety and precautions that they should take to avoid or fend off sexual assault. This meant that I was stuck in my classroom with all of the boys… which was a little awkward to say the least.

See, I live very close to the school I work that, which means this sexual assault happened in my own neighborhood. It’s not highly unusual– Roseland is pretty infamous for it’s high crime rates and dangerous conditions, and it’s not like this is unique to just my neighborhood– this kind of garbage happens all over the world, and in some countries, it happens almost daily.

Ciudad Juárez, in Mexico, is one of those places.

This year marks the twenty-first anniversary of the first disappearances of young women in Juárez. Well, at least when the disappearances started to be recorded, after a 13-year-old girl was kidnapped and then found dead with signs of rape and strangulation. After that, it went from dozens of reported murders in a year, to hundreds. And in 2010, the number peaked–at least 304 women were murdered in just one year (and that is nearly one murder a day).

The circumstances of these crimes were eerily similar; a girl would disappear and a few days or weeks later, her body would be found in the desert or an abandoned lot, obviously tortured and/or raped before her death. Sometimes bodies were found together in mass graves.

But why did these murders continue? Why so many?

The authorities in Juárez first denied the problem, playing it down or even blaming the victim’s lifestyle or their family history. It seems many were more interested in covering up investigations and tampering with evidence than in finding justice for these women and their families.

And that’s when killings of a different kind happened.

The first murder happened at 7:45 am, on August 28th, 2013 on bus route 4A. That morning, a woman climbed the steps to the bus, pulled a gun from her pocket, and shot the driver.  She was a middle-aged woman with dyed blonde hair — or maybe it was a wig — wearing a baseball hat, plaid shirt and jeans.

The second murder happened twenty-four hours later, on the same route. Presumably the same women boarded another bus downtown and a few blocks later requested to stop. She walked towards the exit, then stopped, seeming to look for her bus fare, but instead she drew a gun, muttered a few words into the driver’s ear–“¡Ustedes se creen muy chingones!” (“You all think you are so tough!”)–and then shot him twice in the head before running off of the bus.

One day later, a news website from El Paso called La Polaka, which specializes in covering the political gossip of Juárez, received an email:

You think that because we are women we are weak, and that may be true but only up to a point, because even though we have nobody to defend us and we have to work long hours until late into the night to earn a living for our families we can no longer be silent in the face of these acts that enrage us. We were victims of sexual violence from bus drivers working the maquila night shifts here in Juárez, and although a lot of people know about the things we’ve suffered, nobody defends us nor does anything to protect us. That’s why I am an instrument that will take revenge for many women. For we are seen as weak, but in reality we are not. We are brave. And if we don’t get respect, we will earn that respect with our own hands. We the women of Juárez are strong.

There is no real evidence that the same women who shot the bus drivers was the same women who wrote the letter to the paper, signed Diana. But the bus driver killer herself couldn’t have chosen a better name. Diana the Hunter is the Roman goddess of women and childbirth who acts out of basic human feelings such as rage, and seeking revenge. On one of Mexico City’s most famous streets there is a statue of Diana the Hunter, and it’s replica stands outside of a restaurant in Juárez, perhaps the inspiration for the killer’s alias. Diana’s image is muscular, strong, and she’s holding a bow with her arm stretched back, ready  to shoot.

The women in Juárez were not always willing to talk about their reaction to Diana, but a few shared with interviewers that they were happy that someone was standing up for them– that it felt good to see these bus drivers shaking as they watched any blond women board their bus– that more power was given to the women of Juárez now than ever before, thanks to Diana.

And when I think about this, it outrages me. Perhaps because I am a woman, and I too have felt the fear of being kidnapped or raped while doing normal everyday things, gripping my mace spray tightly as I run past dark allies on early morning when it’s still dark out, or peering around, then running in quickly and locking the car door before I pull out of the dark work parking lot. I imagine this is how African-Americans who have been seeing the police brutality against their own race feel– that they cannot even trust those that are sworn to protect. Like the women of Juárez who have take matters into their own hands in order to feel safe. Like the pregnant college student who cannot walk out to her car during broad daylight and know that she will not be violated by a man with a knife.

No wonder we have Diana, hunter of bus drivers, and the violent riots in Ferguson MO. No wonder I drive 15-30 minutes away from my neighborhood so I can train for my marathon without feeling terrified.

This kind of thing makes me have to evaluate my own moral code. You see, I believe that it is never justified to do wrong to someone in order to “do right”; revenge is never the answer.

Still, there is a small part inside of me that cheers women like Diana on, that says “Get it girl! Do what you gotta do to make them understand!” Perhaps this is the weak part of me, giving into the temptation to solve violence with more violence, but I know others would say this is the strength in me, the desire to fight for my rights and support those that are fighting for theirs.

As a Christian, and as a human being, I cannot believe that multiple methodical murders like this is okay.

As a Christian, and as a scared little girl, I cannot believe that a pregnant women was locked inside the trunk of her own car after being raped by a local teenager… I just cannot believe this stuff even happens…

Because, you see, they did catch the rapist here in Roseland. He lives in my neighborhood and his name was Aaron Parks, and even though I’m a Christian, I really don’t have much sympathy for this 17-year-old.

No, I don’t have sympathy for him. 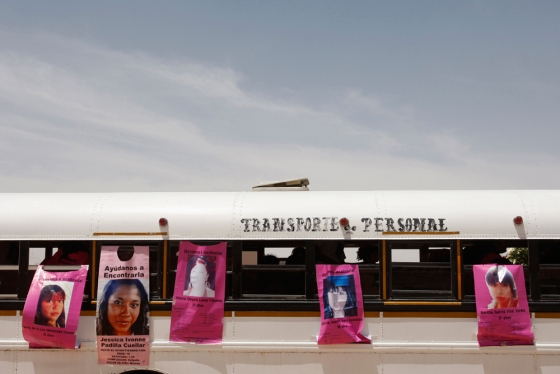 A bus is pasted with posters with pictures of women who went missing, during burial ceremony of remains of Castillo on the outskirts of Ciudad Juarez

But I do have sympathy for the women in Juárez, who can’t even count on their own law enforcement to investigate the rape and murder of 304 women, who can only count on a blond-haired-vigilante-murderer who takes law into her own hands and strikes fear in the hearts of every bus driver in the city.

I have sympathy for the young black men who don’t trust or respect cops because they’ve been pulled over for no reason one too many times–which, by the way, has also happened to me– and been afraid for their own life, because apparently it’s okay for a police officer to racially profile and then shoot a person for being different–which, by the way, has not happened to me– but I have sympathy when they hate white police officers before they even know their name.

I’m a Christian, and so, maybe it’s wrong of me. Because it’s hard for me to reconcile these violent tendencies and fighting–even killing– for rights with the peaceful Jesus who turns the other cheek.

But I have sympathy for them.

And I have empathy for every other women who has to make a plan for what she will do if a man ever approaches her with a knife or a gun or tries to rape her. I empathize with you girl. I really do.

Lover of Jesus, a well-written book, yoga, a hot cup of coffee, and all things cute & cuddly. Fitness enthusiast, professional Help Meet, and a firm believer that there is art and beauty in everything-- even in the way we breathe.